The start of yet another big venture. One for the honor, one for the future and one to find to the roots of myself!

Berlin, 01/19/2014 at 6:50 a.m. (CET) Time to get started. It’s cold here in Berlin and I’m ready for some sun! It’s still quite early in the morning, the wind blows ice-cold and gives me shivers when I enjoy my last cigarette for hours to come. Check-in is easy, you get some routine you know… Time for some last good pastry for the next four month, it’s Franzbrötchen, some cinnamon filled bun, sweet and tasty. 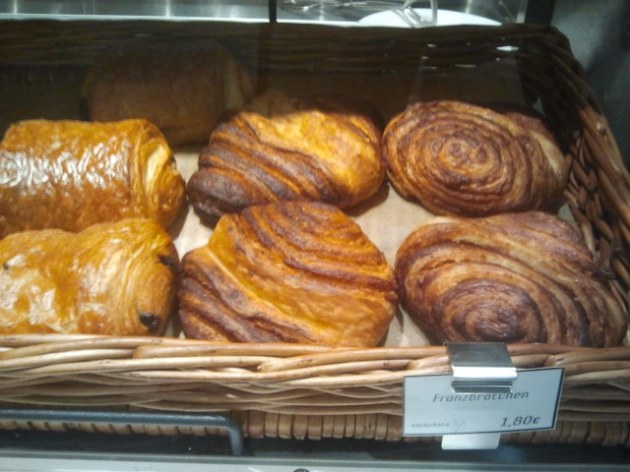 In the USA I will probably not eat bread for the whole time – or I’ll bake it for myself. So many thoughts, positive emotion, plans and ideas that come up to my mind… Hope I haven’t forgotten anything important. Hope everything goes fine and there won’t be any big delays so that I arrive at 7:20 p.m. eastern time (ET) in Gainesville, which is 1:20 a.m. of January 20th in central Europe (CET). Looking forward to meet Trang, who will pick me up at the Airport. Time to lay back, listen to Toro y Moi and get relaxed after the last days full of impressions and adrenaline.

Munich, 01/19/2014 at 11:20 a.m. (CET) Flying with Lufthansa was a pleasure as always. Great service, a nice flight and a great last view on the alps. Everything was covered in fog, just the mountains sticked out and the sun was rising, leaking through some higher clouds – Farewell Nordkette! A view like in heaven, yeah that’s what you actually are in a plane. Really beautiful. I feel like in trance. The last days pass by in a snap and it feels like I live everything again. Awesomess. The plan takes off to Charlotte and I feel that I won’t be able to sleep since my agitation is too big. Have I really not forgotten anything?

Charlotte (USA), 01/19/2014 at around 6 p.m. (ET) Man, that was a crazy trip… One of the waiters faded away after we have been in air for about three hours. Already feared we would have to turn… That was not the case, two physicians brought him back to legs and the dude seemed alright thereafter but didn’t show up anymore for service – sure thing. This time it was a big A330-300 and the comfort was quite OK. A somehow disgusting couple, both Romanians in their early 50s sat beside me, groping, touching and kissing the whole time, and his aftershave made things worse, the dude sweat like a pig and rinsed off the sweat with a towel the whole time. Actually thought about getting another place in the plane to chill out but decided to ignore them. Probably “young” luck who deserves their third spring. Watched Ip Man (finally) and Rorounin Kenshin, both martial arts movies, quite enjoyable. Then I filled my ears with two hours of operas by her majesty Maria Callas and last but not least watched a movie about the Huber Buam, two Tyroleans who tend to discover mountains with extraordinary difficulty their own way. Like their style – that’s the way to go, to do their own thing. A documentary about the alps helped to get at least half of an hour of sleep…

Checking in at the boarder was horrific like always and lasted forever. Of course the plane from Germany wasn’t the only one and of course, American citizens got a preferred treatment. Time was running out and I had to catch a connection flight… Finally made it, after another intimidation in form of a security check. Put everything out of your bags, laptops? Put of your shoes! Bla bla… Yeah there I was short to 6 p.m. and our machine was delayed for 10 min. because not everyone was that fast to pass the line. Gainesville here I come! BUT… the best is still to happen, that wasn’t it by far.

Gainesville, 01/19/2014 at 7:45 p.m. (ET) The suitcase should already be there. Trang is laughing “Maybe your suitcase was not on the plane?” She giggles… I can’t share this enjoyment about this joke at this moment. She is right, the bag was not on the plane so I have no clothes and no body scrub and nothing, not even my cable for my laptop to hook it up and do something. Awesome… Yeah but you know, I wonder about myself I remained really calm and polite, maybe because my strength was missing after the last days and I wasn’t interested in wasting the rest into anger. So we claimed the luggage lost and left for some shopping. Back at the place I got to know some other pharmacy students who reside here at the moment. So far all I met are really nice and I have to say THANK YOU to those guys for the big support from overseas while I fought my own fight in Austria and Germany to get things done.

In the meanwhile it’s already Monday afternoon over here and a nice lady from the airport delivered my suitcase. And when I am done writing, I will finally have a shower and prepare for “Bootcamp” kind of a fitness program for all the guys over here and they already told me it will be tough… Let us see that, the mountains train us – the people from the mountains (yeah I am looking forward to say that to people who ask where I am from in an ugly German dialect) – quite well I’d rather say 😉