L.A. is my next stop and it is vast! Many people said they have been disappointed, I am not so far, albeit from the parking tickets I got issued. It’s a lively city with awesome beaches and lots of great things to discover, those 20 hours I will remain here are way too short.

I start at Kirsten’s (my airbnb host) place much later than actually planned. I wake up at 3:30 a.m. and fell asleep again. You know that kind of deep sleep you hit when you already woke up, no chance of realizing the alarm at 5:00 a.m. that was actually the time I intended to leave. Doesn’t matter, it’s vacation right? I start at 9:45 a.m. after yet another round of splendid scrambled eggs from Kirsten’s hens and two decent coffees. The night before I got instructions by one of her friends, to leave as early as possible because of the horrific traffic. Yeah whatever… out of San Diego everything is fine, I make a good mileage but 40 miles towards the greater L.A. area I hit the first CF – would that be nice to be on that passing Amtrak… 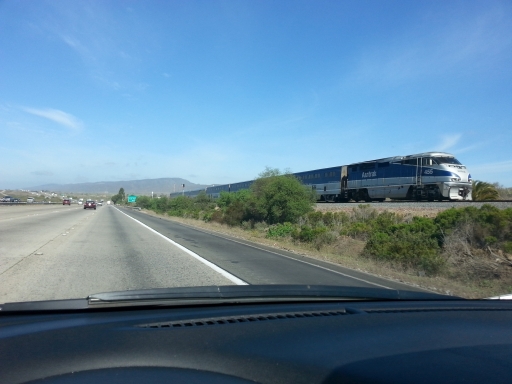 Unbelievable to see a train in the USA! I leave interstate 5 at Dana Point and take US-1 PCH (Pacific Highway), great thing to do, but you need time! I see many splendid beaches, one of the most beautiful close behind Dana Point, with dozens of Beach-Volleyball courts in the fine sand.

From there it takes basically 3 hours to Malibu, 2 stops included. Malibu – most likely known due to Charlie Sheen and the TV Series Two and a Half Men – might be great, the cribs are for sure, the accessible beaches aren’t too beautiful tho and the one that probably is has access only for members or a $30 entrance coverage… WTF – officially covered as parking fees, since it is not allowed to close beaches for the public in California.

I decide to proceed to Santa Monica beach, after i have dinner at Malibu Seafood, pretty decent. Half an hour later I’m finally there and go jogging first, about 3 miles directly at the beach, thereafter some workout, great! And afterwards I take a bath in the Pacific, again although it’s pretty cold today. But still so  rewarding!

The sun starts to set as soon as I finish and it’s awesome! I stay there for another hour although it’s freezing cold in the meanwhile. Then I climb the steps up to the Santa Monica district and Palisades Park. It takes me longer than thought but strolling through a beautiful neighborhood never hurts, right?

Unfortunately  a ticket is waiting for me, for just being 20 min. late at my car. A sweet ticket of $53 for disobey of the night parking prohibition. They charge you $6 parking fees for the whole fucking day, no matter when you arrive, total amount and if you are a couple of minutes too late you get busted. That sucks! Santa Monica beach is great tho and the walk along Ocean Drive just after sunset was a pleasure. I’m pretty done and try to find my way to my place. I.e. time for espresso at Starbucks (Wi-Fi-access for free)…

After a good hour “at home” I start again. Make my way to the Griffith Observatory before closure and it’s totally worth it! You know what? L.A. has several skylines and it’s just humongous in size! While I digitalize some of my impressions about 2 dozens of coyote start howling to the moon which is just newly born, yet just a sickle. What a great mood, directly under the sign of Hollywood! 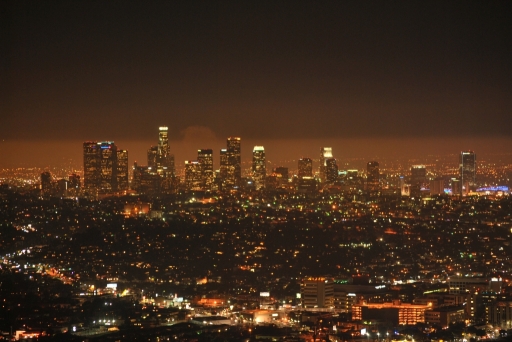 And thereafter? Right now I’m in the Satellite at Silverline Blvd, today is Monday, they are free of charge and Monday means there is a chance for yet unknown artists. And this place is known as a great location where unknown rock stars were born! I listen to some guys while I blog, couldn’t be better :-), The Eagle Rock Gospel Singers are a tad weird and pretty much country, they sing about Jesus, but somehow gotta say it rocks bad-ass, interesting anyways and they are absolutely real, like devoted to their band’s name. 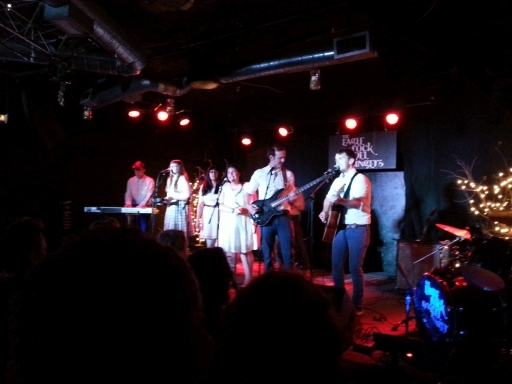 The guy, Rich Aucion, who’s the last one of the night is crazy, but I really like his style, he knows how to get the people going, although he is a bit scary. His song Push still sticks on my mind!

End of the night for me, still another 45 min. to ride home, L.A. is stretched out! And when I come to my car I find another ticket, this time for $68 for wrong parking, because there was a sign I have overseen… Parking tickets suck, no matter if in IBK, Montreal, Toronto or over here in the US. I just get the feeling they are really cheap in Europe compared to the US. It’s kind of a mean tourist fee, that’s what it is…