The way from Panama City to San Jose takes us a full night and passing the boarder with the Expresso bus is no joy. It takes long, nearly 3h, until we have done everything. I observe the locals, they get out of the bus at the border and make it on their feet. As I realize later, it’s way faster. I decide to stay in San Jose at night and continue to Monteverde the next day… A good decision since catching a bus would have been difficult, the border took us too long.

Stefan joins me to Costa Rica, we want to go to Monteverde – we get a cab and go to the bus station of Panama City (ciudád de Panama). There is a huge shopping mall and we stroll around. The ticket is 40$ for the over night bus to San José from there we have to catch the bus to Monteverde, but the time is very limited to actually do that – we better get over the border in short time.

We attend the fish market a last time for a last Ceviche (for me, Stefan will be back) and another great plate with fish, patatas frijas (a special kind of fried banana) and great salad, spiced with estragon and salsa picante.

Panama really has it all. We continue to the Panama channel but the museum is already closed that sucks so we find another cab driver who brings us to one of the watergates. 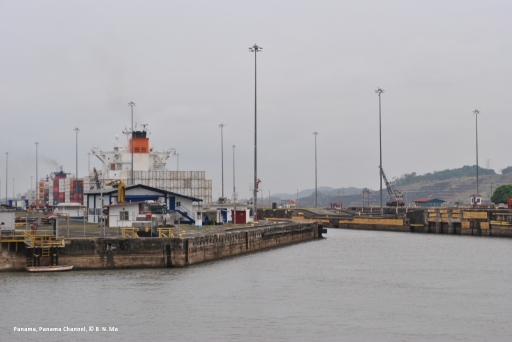 Back to the hostel I start boozing and we meet yet another German, Basti from Munich – I start to wonder wether there are just Bavarians? We find out that there will be no chance to catch the connecting bus to Monteverde anymore… Stefan seems a little pissed about that, but agrees that it is a good oportunity to wash cloth and relax for one day. Around 10 pm we are back at the bus terminal. We meet 2 girls from San Blas who go to San José as well. The ride seems to take forever and it’s freezing cold. I barely can sleep, at least there are not too many people so you can stretch out a little bit. In the morning we have to wait 3 hours at the border. We meet Dani, a cute latina from Costa Rica, who we met initially on our first day on San Blas. This time the friend of her is not with her, she tells Stefan, that he is Costa Rican as well but works in Panama City. She goes to San José as we do, that’s where she lives. I am happy to see her, and she gives me her number and I have to promise that I contact her. She is very cute… It’s hard to do conversation, she doesn’t speak any English, I don’t speak any Spanish, but somehow we understand each other, say goodbye and promise to stay in touch via WhatsApp.

Costa Rica from the bus Windows looks less polluted than Panama. And there seems to be much more forest. I think of those last days in paradise, of my salsa night in Santa Catalina, of the cloud rainforest which is up to come, of the underwater world, and I finally fall asleep. After another stop I talk to a nice girl, Kelly, from Florida. She lives here since eight month, mainly in Panama but visits some friends in Costa Rica. She recommends me to stay at Jáco at the beach and continue to Monteverde the next day. Later I decide to go to San José for one night with Stefan and Dennis, to get the cloth washed and relax one night. We met Dennis on the bus and he is from Munich… – hmmm. He invites us to come with him to his hostel, the Love Hostel 2, which is a bit outside in San Antonio of San José, in a safe area. So we follow him there and it’s a really nice hostel, hidden quite well and the owner is a hobby DJ with talent, as we find out during the evening. 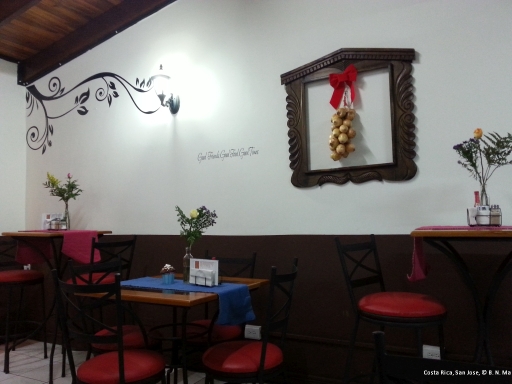 The atmosphere there is great and I chill with some other guys from Germany since one of them has his birthday. It’s time to say good bye to Stefan, was fun traveling with you lad! Totally destroyed I fall into bed and hope that my laundry will be done the next day and that I make it to the bus to Monteverde on time. Still wasted I get up, 5:30h – wahhh – like all the last days. We just start at 5:48h by car to the station… I’m a bit in worry I won’t catch my bus which leaves at 6 am. Manuel speeds through the city with probably 80 kph and at 5:59h we are there and the bus is already going to leave but for my luck a cab blocks the way and I catch it last second. It makes its way into the highlands of Costa Rica, it’s beautiful! 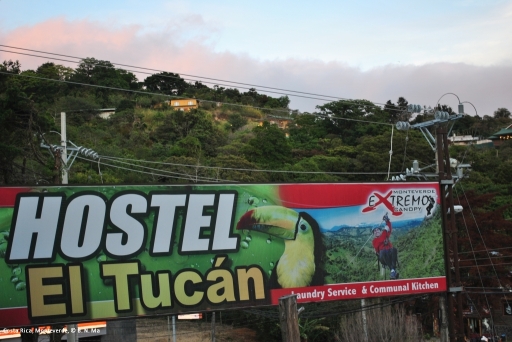 Around lunchtime I’m there, get a comfortable room in the hostel El Tucan and book the Canopy Extreme Tour for the afternoon. I meet two Canadians, Kylie and Simon who travel together. There are two German guys as well who look really tired and obviously suffer from their jetlag. Sven and Jochen, and they join for the ziplining tour in the afternoon.