The Phở is a traditional Vietnamese dish. You can either prepare it with chicken or with beef. Bot soups are outstandingly enjoyable and you can even freeze the soup without the fresh ingredients to rewarm it another time. One chicken gives soup for up to ten portions of the dish! 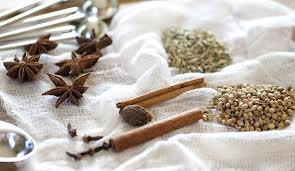 What you need: 1 soup hen (for Phở Gà)  or 1 decent piece of beef for soups (for Phở Bò), ginger rhizoma (zingiber officinale rhizoma), amomum tsaoko semen, 4 – 5 “stars” of star-anis (Illicium verum) and 3 cinnamon bars (cinnamomum verum) – or you use an already prepared seasoning mixture called Pho soup seasoning (or similar) and you take half of a package for a whole pot, sugar (1 big spoon), salt (1 teaspoon) and pepper (1 teaspoon), 1 – 2 onions. This is the ingredients for the soup itself. As inlay into the soup you need: Soy sprouts, coriander, spring onions, pho noodles, fish sauce, hoisin sauce and the classic red sriracha sauce, and for those who like it spiced up, fine sliced thai chili (optional)

How you do it: Cook the soup hen / the beef in a big pot and use as much water, so everything is covered. Put the lid while you cook it and start the seasoning just after some time. The hen has to be turned several times and all the meat will be done after about 90 min. (at least).

The ginger is added first with the salt and the sugar, followed by the pho soup seasoning. You add it after 30 min. The onions and the pepper are added later, after about 60 min. of cooking. After 90 – 120 min. the meat is taken out of the soup and you have to peel off the meat of the chicken’s bones in quite fine stripes. The alternative (less work for Pho Bo): The beef is sliced into thin, small pieces. The meat is put aside. The noodles are cooked while you are busy peeling off the meat. You then slice coriander, spring onions, and chili, clean the soy sprouts and put everything aside. The noodles, when done, are washed with cold and warm water, so they don’t stick together too much.

The soup which you obtained from cooking the meats is portioned into a bowl, the mixed meats are added, as are the noodles and some spoons of all the different vegetable ingredients. The original taste is obtained if you spice up with hoisin sauce, fish sauce, and sriracha sauce.