GERMANY is worldchampion in football and won the finals against Argentina in the World Championship in Brazil 2014.

This night will remain in our memories. This night caused us lots of worries, lots of joy and happiness. The Football World Championship in Brazil 2014 ended this night, with a close but deserved victory of our team, of my team, Germany, which we lovingly cheer to as SCHLAND – against a very strong and minimalistic Argentinian team!

The game was so close and Argentina really played strong, so strong that my friends and I jumped up from the couch several times, shouting at the screen. Imagine this scenery, it is somehow really ridiculous, but that is football! After the game’s end there was no time to waste to get into Berlin’s epicenter to Zoologischer Garten. 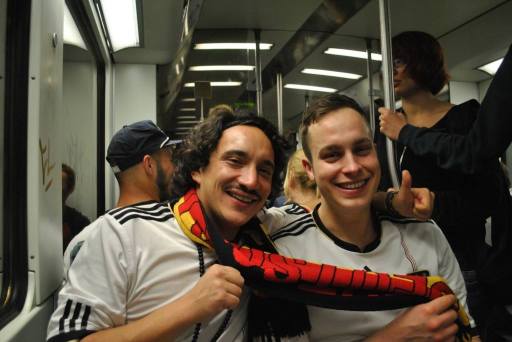 WIR SIND WELTMEISTER! WE ARE THE CHAMPIONS!

The way to Zoo in the S Bahn was memorable, all the people were singing together and jumping in the wagons. Thousands of people were on the streets celebrating. Fireworks exploded every second. The cops controlled everything, without showing emotions. 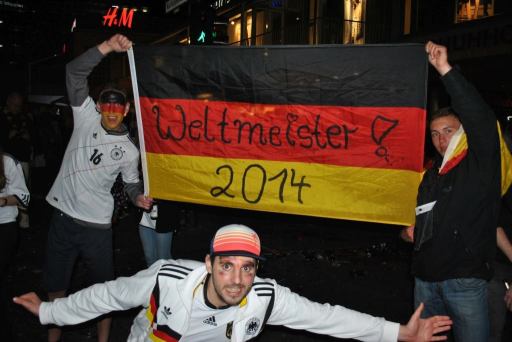 In the middle of all the festivities a good amount of palestine guys celebrated with us, reminding of the the war which goes on between Isreal and the palestine people. Over all everything was loud, happy and very peaceful, just epic!!! It is an incredible feeling to be part of it and a long time, since 1996, that we were allowed to celebrate our football team again, how beautiful. Berlin is, not just because of the diversity, a great place to celebrate an event like that! Thank you DFB-team, thank you Brazil for all the beautiful images during the last four weeks. May the next Championship be as epic as this one!